The Shree Chhatrapati Shivaji Sports Complex, Balewadi, Mahalunge, Pune is an Indian sports complex, which includes the Shree Shiv Chhatrapati Sports Complex Stadium. The complex is situated in Balewadi, Mahalunge Pune, about 14–15 km from Pune downtown and 4–5 km from Rajiv Gandhi Infotech Park, Hinjewadi, Pune. This complex was the venue for the 2008 Commonwealth Youth Games. The administrative office is open from 10am–5pm on Monday to Saturday except second and fourth Saturdays of calendar month and government holidays.

This complex was built in 1994 for the National Games 1994, which were hosted by Pune. The 2008 Commonwealth Youth Games were hosted here. In 2008 the World Junior Table Tennis Circuit was successfully held here. The 2009 FIVB Men’s Junior World Championship was held here. It was won by Brazil. The city is also the host of FIBA Asia Under-16 Championship for Women 2009.

Beginning in fall 2012, the Athletics Stadium will undergo a retrofitting and become the host stadium for the Elite Football League of India and the home arena for the Pune Marathas.

The 2009 FIVB Men’s Junior World Championship was held on 31 July 2009 to 9 August 2009. Host India ended 4th in this tournament. This Tournament was conducted in Badminton Hall and Boxing Arena. Brazil won this championship.

The Athletics stadium has a seating capacity of roughly 20,000 people at a time, Flood lights and an 8 lane track.

India versus Vietnam football match in the Athletics Stadium

The athletics stadium also hosts the I-League matches for Pune F.C.. It has also hosted matches for the India national football team. India played against Vietnam in a friendly match over here. India played their first match in the 2012 London Olympic Qualifiers (first round) against Myanmar. India won it by a score 2-1. India drew with Qatar in the 2012 London Olympic Qualifier (Second round) at the stadium by a score 1-1. Then during the 2011 Indian Federation Cup the Balewadi Sports Complex co-hosted with the Salt Lake Stadium the Federation Cup group-stages. The Federation Cup is the second most important football competition in India. This stadium will also be the host for upcoming Indian Super League for FC Pune City bought by Bollywood actor Hritik Roshan.

This Aquatics centre contains two 50 x 25m swimming pools, with a seating capacity of 3500 people. This has changing room for players. Seating and lounges are for VIPs. For public usage the pool timings are 6:00 AM – 9:00AM and 3:00 PM – 6:00 PM from Monday to Saturday. 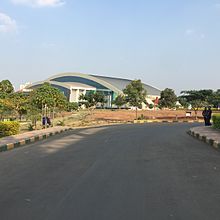 The Badminton hall 6 competition courts and 4 warm-up courts, and has a seating capacity of 3800 people at a time. This hall is air condition and has wooden floor. It has changing room for players and sitting & lounges for VIPs. This venue is the home ground of Pune Pistons a franchise in Indian Badminton League (IBL). So far 3 IBL matches have been played on this venue.

The first edition of FIBA Asia Under-16 Championship for Women was played on this stadium from 30 November 2009 to 6 December 2009. Host India finished on fifth position..

The Boxing arena has 3 rings, and 5 warm-up rings, with a seating capacity of 3500 peoples. This hall is air conditioned and has changing rooms for players. This arena is the host of 2011 World Series Boxing.

The complex has 15 shooting ranges, with a seating capacity of 1500. The ranges are constructed according to ISSF rules world championship.

The hall, with a seating capacity of 1500 people, successfully held World Junior Table Tennis Circuit in September 2008. This has 4 competition tables and 4 warm up tables. This hall is air conditioned and has changing rooms for players. Seating and lounges are for VIPs.

The Tennis courts feature one central court and four competition courts, with six warm-up courts. Centre court has a seating capacity of 4200 people.

This hall seats 3000 people. It hosted the 2009 commonwealth bench press championships. The most famous athlete to compete was Britain’s strongest man Paddy the Pac man Jumelle. The hall is air conditioned and has one competition podium and 10 warm-up platforms. Seating and lounges are provided for VIPs. There is also a changing room for competitors.

The wrestling hall has four rings, and six warm-up rings with a seating capacity of 4400 people. This has seating and lounges for VIPs. This also has change room for players. This is an air conditioned hall.

The 333.33 m or 1,093.6 ft velodrome is outdoor and the surface is made of concrete. While it was a prime venue for the 3rd Nationals Games in the year 1993-94 it has never been a place for any major events thereafter, and was left unused. In 2014 it was announced that with a Rs 10 crore maintenance grant from the governments for the entire complex, the facelift of the velodrome had top priority. At that time the velodrome was in dilapidated state.

This is a non sporting venue at the sports city with 400 rooms, ranging between three and five star.

The other buildings are as follows:

This centre has equipment to develop physical and physiological attributes. This hall is air condition hall and has provision for Yoga and Meditation. This has provision for sauna and chill water bath for recovery.

View all posts by Balewadi →